The Worlds Universities Debating Championship 2018 is hosted by Mexico this year. The tournament will start on the 27th December 2017 and will end on the 4th of January, with the Grand Finals on the 3rd of January 2018.
There are several teams on site that will allow us to get great info on what is going on and of course we will report with the always updated debate motions from the tournament.

This is the schedule that the organisers published on their website: 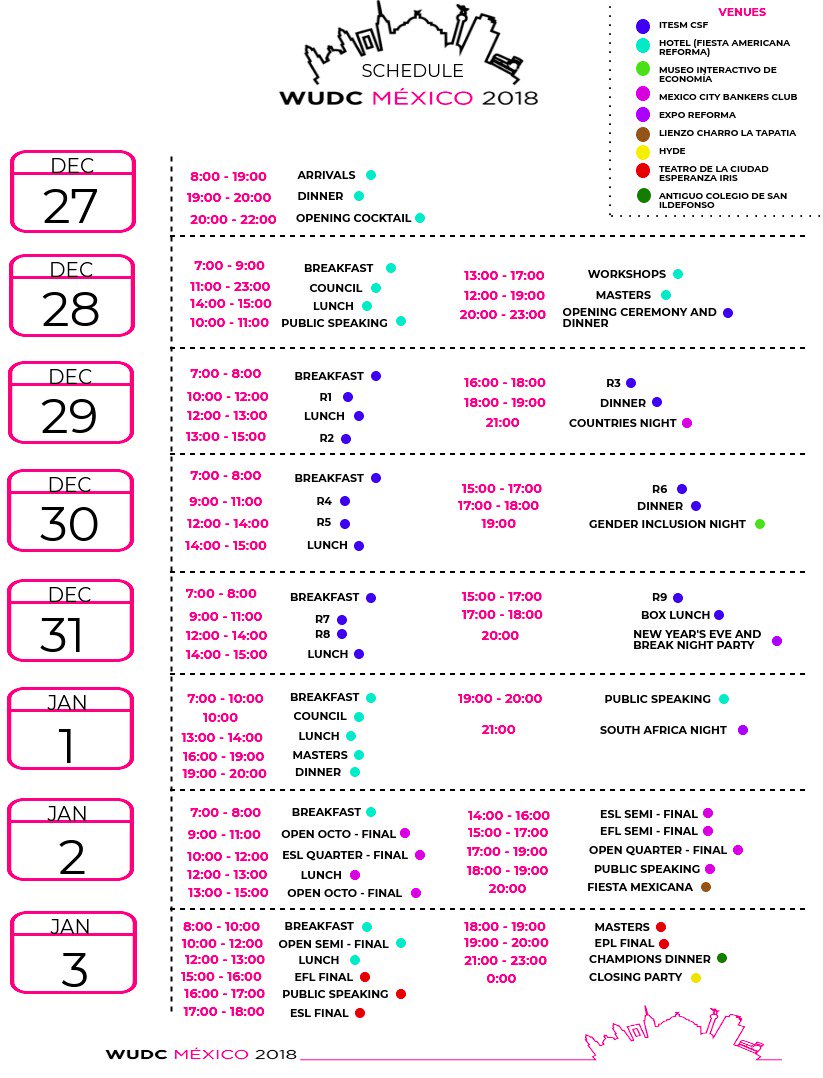 Round 1 motion: This house would ban all communication tech companies (such as Google, Apple, Facebook, Whatsapp, etc.) from encrypting their users data, including the content of their communications, in such a way that the company cannot retrieve that data even under a court order.
Round 2 info slide: For the purpose of this debate, “job security legislation” refers to laws intended to make businesses fire employees less often. Its goal is to disincentives the termination of existing employees, whether the business employs an alternative individual to replace them or not. Examples of this legislation include, but are not limited to, increased severance pay and detailed cause requirements for terminating employment. Protections against discriminatory termination or similar laws do not fall under this term. Round 2 motion: This house supports job security legislation.
Round 3 info slide: The current criterion in the US as to whether a police offices used excessive force is whether he acted reasonably given his perspective at the time and without the benefit of hindsight. Academic research has shown that when using this criterion, juries consistently conclude that officers harming or killing black individuals acted reasonably in almost all circumstances. Motion: This house would redefine the criterion for excessive force in the US to be any use of beyond what is reasonable given all the facts of the case, including the benefit of hindsight (e.g. whether the individual had a gun, not whether it was reasonable to believe he had a gun).
Round 4 Info slide:
The art that you see in a museum typically comes from one of the following sources: i) that museum’s permament collection that’s always on display, ii) that museum’s permament collection that is mostly kept in storage and may occasionally be displayed (the largest museums usually display as little as 5% of their collections); iii) pieces lent to that museum on a temporary basis by another museum iv) pieces donated or lent by private individuals or institutions. MOTION: This house would limit the amount of time that a museum can display a given piece of art to 3 months out of every 10 year period, rather than allow museums to display their works as long as they choose.
Round 5: This house would allow citizens to vote on individual bills in place of their representative, with the representative retaining the voting power of those of their constituents who did not directly vote on that specific bill.
Round 6 info slide: CRISPR is currently the only existing technology that allows cheap, fast and targeted gene edition in living organisms. It potentially allows for heritable* changes, though so far very little research on such heritable changes in humans has occurred. * heritable changes are changes that can be passed on from parents to their children. Round 6 motion: This house believes that all states should mandate that research on and use of CRISPR technology be exclusively carried out by institutions funded entirely by the state.
Round 7 motion: This house, as Iran, would cease all support for military groups in the Middle East (e.g. Hezbollah, Hamas, Houthis, etc.).
Round 8 motion: This house prefers a world in which all individuals who have achieved a middle class standard of living choose to pursue the highest level of achievement in their chosen career, rather than a wold in which those individuals priorities day-to-day enjoyment over work.
Round 9 motion: This house would not allow out of court settlements for workplace discrimination and harrasment.

Open quarters Info slide: Individuals with Anti-Social Personality Disorder (ASPD), formerly known as sociopathy, have a highly reduced ability to feel empathy. People with ASPD do potentially have the ability to feel empathy, and, as with other emotions, their capacity to feel empathy can be increased based on exposure to certain experiences and relationships, yet is unlikely to reach what is considered a “normal” level.
Motion: This house, as a parent of a child with ASPD, would enable and support that child given that child’s aims based on their current psychological makeup, instead of trying to make them more empathic.

Open semifinal motion:
This house would create an international court with the ability to classify national debt as “Odious Debt” at the debtor nation’s request and remove the obligation of that nation to pay.

Open Final motion:
This House would rather save the live of a single child over extending the life of 5 adults by 10 years
ESL FINAL:
In democratic post-colonial states, This house believes that opposition parties to the party of independence should claim and use the legacy of anti-colonial resistance.
EFL finals motion:
This house believes that it is better for the general population to be more optimistic about the current and future state of the nation (including societal cohesion, peace processes, the state of the economy) than an objectively accurate judgement.