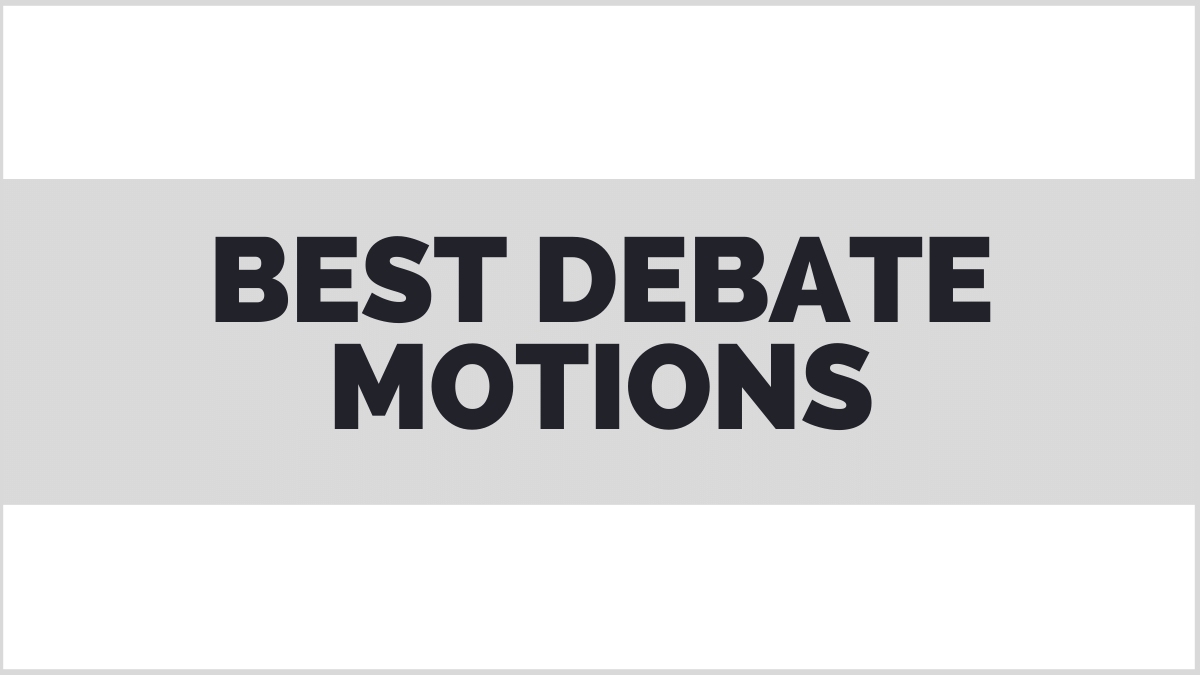 There are so many different debate topics, that can be used in your debate club or for yourself to practice debate, that it is usually hard to find the one topic that you would like to try. This is why this webpage exists, and here we are to supply you with a big list of debatable topics. The best way that we think, to sort out the good debate motions from the topics, that are not really suitable for debate is, that you check out what tournament has used a topic. Great tournaments often (but not all the time), use great debate topics for their debaters. This is why we have collected all the great motions from the biggest tournaments from all around the world so that you can make a selection yourself.

If that is not enough for you, consider debate motions from the biggest tournaments around the world, like the EUDC, WUDC, Australs, and UADC.

Ever happened to you that you had no idea about a motion? Here are ideas on what to do and still win a debate:

Tell us what do you think about these topics, and how your debate went in the comments!

There are three types of debate motions/debate topics

In these debateable topics you debate weather something is true or not, this is the most basic sort of a motion. Here are a couple of examples:
This house believes that advertising does more harm than good.
What is important with this type of motions is that you set a standard to determine who wins. There are different standards that you can set, a couple of examples are “Majority of examples” or “True beyond a reasonable doubt”.

With these debate topic, you need to debate if something is or is not of inherent value. For example, in the motion, This house believes that Shakespeare is the world’s greatest writer, you need to find the term that adds value and then develop a criterion again, that will allow you to win the debate if you meet that criteria. This means in this example that you find a couple of criteria that define a great writer and then show that Shakespeare is/is not the greatest writer.

You can say that the number of readers, the longevity of his works, the number of languages that his work has been translated to etc. Of course, your criteria needs to be reasonable and linked to the motion. Don’t forget to explain why is your criteria the right one. If you set criteria “The writer that looks like Shakespeare most” won’t really hold and won’t allow you to win even if you prove that you fulfil the criteria.

This motion always calls for an action, by the government, an individual or an international body. For example, This house would legalize prostitution. Your job is to propose a model, how will you do that and show relevant details for that model (but don’t go too deep into it).

When you build the model think about what could the opposition say. If you propose that everyone can be a prostitute, your opposition will see that you are allowing children to be prostitutes. The model should be a good base on which you can build your arguments, but should not take more than a minute to explain, because your role is still to provide the best arguments why this motion should be supported.

But, when you get such a debatable topic, don’t focus too much on the policy. You still need to bring great arguments, this is the criteria that you will be judged on. So prepare a policy, have a good plan, but 3 arguments, that are really important, should be 70 % of your speach.

This is a list of funny debate motions. They don’t always make the best debates but can be fun and funny if the debaters debating them know how to have fun. Try them out!

If you are looking for funny debatable topics, I’ve created a whole page full of funny debate motions, find it here.

There are three types of debate motions/debate topics