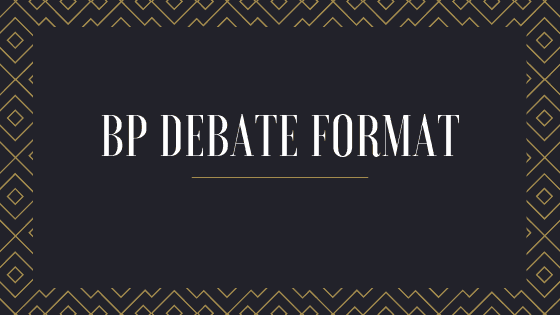 Duration of the speeches: 5 or 7 minutes

Description of the format

The teams are divided into the “government” – affirmative and “opposition” – negative. The first two teams, also called the first table start the debate, the second table teams have to extend the debate on a different level. This is also called extending the debate and is often seen as the most problematic thing to do in BP debates. The motions are usually plan motions, that means that the government has to propose a plan or a change in the policy. The adjudicators decide on the argumentation and role fulfillment, style is also important.

This format is a really interesting format because there is a lot going on in the debates. All the speakers can ask questions and stay relevant in the debate all the time (when the opposing side is speaking of course). Also, the rules allow for a bit more relaxed speeches that allow the speakers to show their own personality in the presentations.

Used in: University student debate in the Europe and elsewhere. Europeans (EUDC) and Worlds  (WUDC) are organized every year. If you wo