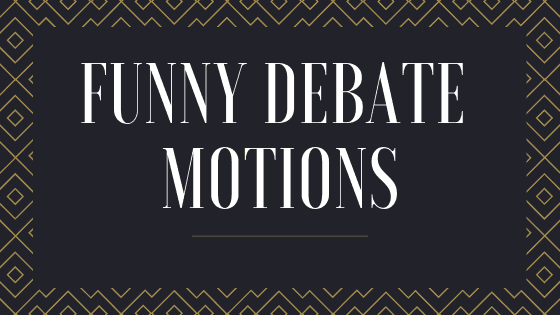 If you are a debate coach or a debate mentor that organises debate tournaments or debate trainings, you always need new debate topics. And of course some of them need to be funny debate topics, so that people have at least one of the rounds some fun.

Finding debate topics for your next training debate can be hard, this is why I’m using all my history as a debate organizer to get together all the debate topics that were used on different debate tournaments.

This is a big list of funny debate topics.

Do these fun debate topics make for funny debates? Or for good debates?

Well, this one is hard. People sometimes see an “easy” or “fun” topic and do less prep. They see sex education and get too excited.

They don’t prepare as they would for a hard topic and then we get bad debates. Because if you don’t have any arguments, you can’t really be funny. So proceed with caution.

But of course, it is usually a good idea to have at least one light motion on your tournament, because people have to work hard all the time and need some relaxation.

What is a debate topic

Debate topics or motions are used in debate tournaments and preparation sessions. They are claims or sentences that you have to talk about in a debate tournament. There are several different types of debate topics. Some of them are funny, others are serious, they can be open or closed, require a plan etc.

What is a funny debate topic

6 thoughts on “Funny debate topics for your debates”